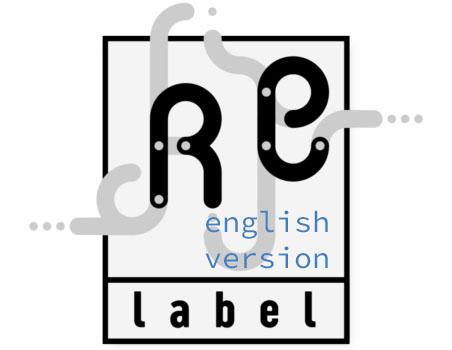 Reuse, a common idea for the territory.

The AGEC law has just become part of the daily life of French people as of January 1st 2021. This new Anti-Waste for a Circular Economy framework is already applied in many sectors by pointing out single-use plastics, lengthening the life of products, preserving resources, and increasing recycling. It is in this frame that RE-Label is involved: for the transformation of practices within manufacturing workshops, for a facilitated implementation of a circular economy approach serving ecosystem of actors on its territory.

For the past ten years, dozens of manufacturing workshops in Northeastern Paris – third places and small businesses – have gathered to share services, skills, tools and training. On several occasions, these communities have demonstrated their ability to engage on various issues, to think of a social mission beyond their productive, manufacturing function. We can note that the collective commitment to practices that have less ecological impact, are more energy efficient and more re-distributive. The issues of reuse – and recycling – are worked on daily, at different scales, within workshops and networks such as the Fab City Grand Paris association. However, in terms of the classical economy, these activities remain a secondary field of observation, invisible and poorly coordinated. RE_label proposes a new observation scheme thanks to tools and methods available to a group of actors (workshops, storage places, designers…) on a given territory.

RE_label is driven by the Ars Longa association as part of the REFLOW research-action program (reflowproject.eu) which brings together about  thirty actors (universities, associations, companies) of different sizes and nationalities in six European pilot cities. REFLOW questions the capacity of metropolises to become aware of their ecological footprint on the life cycle and material flows that meet the needs of the city. RE_label is an experimentation base on by the observation and qualification of practices within each workshop. These are also protocols that we iterate in close collaboration with the actors of the territory to propose a method and simple, accessible tools. Our team also relies on the work and expertise associated with the REFLOW program: the Fab City Grand Paris association, the Volumes Coworking company and the City of Paris. Within the framework of this collective research program, Paris addresses the events sector and more particularly the flow of wood materials.

An observation over time

Among the fields that are still difficult to access through automation routines, reuse requires an increased need for time and human’s skills to source, identify, qualify the material and designate a new use for it. Because this skill is poorly identified, Ars Longa proposes with RE_label to make it the main axis of analysis of its monitoring tool.

Our protocol observes the practices to account for the activity in motion in the workshop through certain achievements with remarkable qualities. When the RE-label tool is deployed, an initial analysis and calibration work is necessary to facilitate the community’s involvement in the system. On the basis of the last 6 months of activity, using the RE_label form and methodology, the workshop reports its observed man/woman effort rates and the volumes of materials used, specifying if necessary the quality of the works carried out over this period. This first work allows the generation of an ‘openness’ label which is inscribed on a map, in the same way as the other workshops involved. This RE-Label, the initial graphic identity of the workshop, evolves over time. The workshop’s efforts are then regularly reviewed, according to a collectively determined frequency (monthly by default). In this way, the label unfolds over time and valorizes both a singular and collective approach in a defined ecosystem. The data, which has become variable, offers a reading of the evolution of each project and questions the capacity of a group of actors to fluidify its interconnections and enhance its practices on reuse. 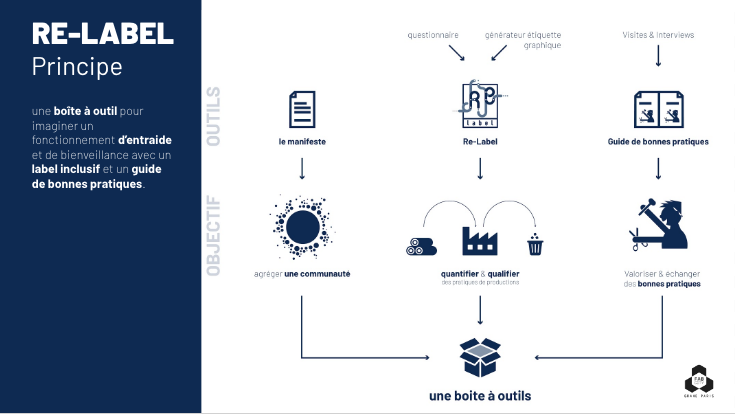 A certification for the transaction

RE-label offers the possibility to valorize a project of object, of fitting out – unique or in series – marker of the approach of a place, of a creator. This is the RE_label certification.

During a sale, the seller and the buyer can base their transaction on factual measurements (origin, history, quality of the material, man/woman time). RE_Label proposes to gather these elements in a single document, the RE_Label certificate, edited by an online generator. The document is dated and signed by the designer or the workshop manager. This approach acts in a simple and fast way the specificities and singularities of a realization. This certificate gives quantitative and qualitative information following the same data entry system of the follow-up form.

A catalog of RE_Label objects and achievements

Each ecosystem has the possibility to build up a catalog of RE-label objects, visible online. Beyond its goodwill function, the catalog can be a powerful tool to boost collaboration between workshops by sharing and optimizing cutting files. This mutualization can be done thanks to the shared access of a library of useful/necessary shapes allowing the constitution of a small decentralized stock of pre-cut parts, in order to avoid the scraps.

Registering your territory on a labeling process is, above all, making visible a collective approach and  aware of the challenges of Reuse. If the RE-Label toolbox is made up of a map, a form and an online generator – freely accessible – it is accompanied by assistance in the collective handling of the method and its tools.

This animation, or orchestration, is led by one of the stakeholders of the community of actors involved. It can be private (association, cooperative) or public (local authority: city, urban community, department or region). Its coordination role is modulated according to the governance tools used in the territory. It is not impossible for a large company to take over the coordination role, but this is not being studied.

The coordinator initiates a work of upgrading the knowledge of the actors during an information meeting and ensures a common commitment: to develop an integrated practice of reuse and recycling on a small scale in the sector of design and production of objects and fittings.

Then he organizes one or more workshops to get the system up and running, ensures that the first results are well coordinated, and then develops the communication around the project. His or her role as orchestrator must facilitate the input of data from participants, report collectively on developments, welcome new actors and animate trust for a peer-to-peer dialogue.

RE_label, the story of the invisible

Practices between workshops differ and leave a more or less important place to reuse. In this sector, creators, designers, are subject to an additional constraint: they have to integrate new variables into the heart of their project: the quantity and quality of an ephemeral and/or discontinuous source of material. These variables become the constrained and inspiring framework of their creations. This new way of « thinking » the order implies to re-articulate the automatisms of work. This is why RE_Label tries to extract and distinguish in priority the data « time conception/production reuse » and time management/reuse » which try to identify the effort devoted outside conception/production (the search for materials and deposits, the dismantling of devices with a view to their reuse, the organization and the storage of the material, its standard shaping (recutting, sanding…)

For a year, we have been investigating designers, craftsmen, workshops, storage places, temporary places, ressourceries and communities to determine the most relevant work protocols adapted to the life of a workshop. The information collected offers a reading of the strengths and weaknesses of the territory on the subjects of reuse, on the needs of a community of committed actors.  It is also a necessary light on the efforts associated with our practices and representations of reuse.

Invisible, often devalued and underpaid, the hours of work spent qualifying and reintegrating materials from a first life into a new project are the formidable pivots of a learning process of the circular economy, a time of experimentation to test certain representations of the world after. As for logistics and its last mile economy, RE-Label is part of a strategy to make visible the first hours of RE-employment which are the key to the sector, an asset for responsible consumption.